Like most major cities, Boston is a series of unique neighborhoods – 23 to be exact. Each one has its own feel and flavors.

Dorchester is the place to go for a bowl of pho, while Roxbury has some of the best regional African and soul food options in the Bay State. The North End is now the largest Little Italy in the Northeast, while multigenerational Jewish delis in Brookline are still going strong. Unofficial Koreatowns and Chinatowns are emerging in neighboring Allston and Quincy. And a short train ride from North Station will take you to the highest concentration of Cambodian restaurants in the country.

From Dorchester to the North End and the Lowell Highlands to North Quincy, here is our list of some of the best Greater Boston neighborhoods for foodies. 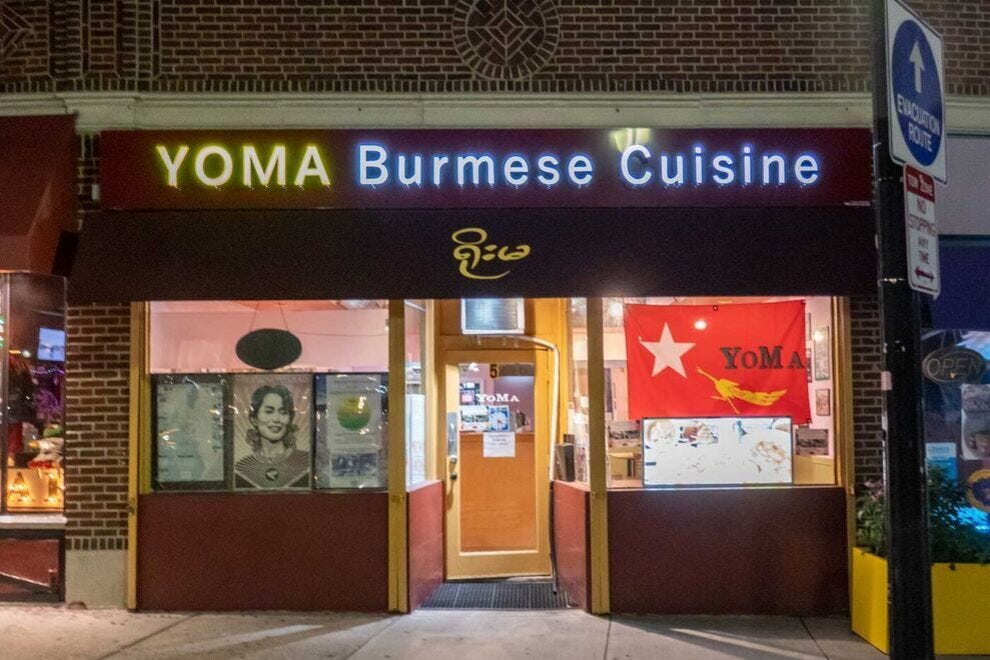 The stretch of Harvard Avenue between Gardner Street and Commonwealth Avenue is Greater Boston’s unofficial Koreatown. This area – where the members of Aerosmith once shared an apartment – is now lined with Korean barbeque joints and cute bubble tea shops.

Tiger Sugar sells a variety of different tea and milk drinks with black sugar boba, and the drink names get pretty creative. Brave as a Tiger is on the decadent side, with a mix of pearl milk and cream mousse. They also have chocolate and coffee varieties. As of this writing, there’s no Eye of the Tiger.

Allston is also home to Greater Boston’s only Burmese restaurant. Thawdar Kyaw and her husband opened Yoma in 2007 to serve the local student population. Their tea leaf salad became so popular that, in 2013, it inspired them to open a Burmese grocery store in the same space as the restaurant. They started by selling the main ingredients you need to make lahphet thoke (tea leaf salad).

Even during the height of COVID, they continued to distribute hard-to-find ingredients to the rest of the country. Today, they have a separate warehouse in addition to the small section of the restaurant at the intersection of Beacon and Cambridge.

There are too many Korean options to list individually, but Seoul Topokki is an ideal street food option, while Korean Garden has the traditional grill-your-own-BBQ option. Kimchipapi serves Korean-inspired poke bowls, while Seoul Soulongtang are known for their beef broth soups. Yoma’s Thawdar Kyaw prefers Tiger Sugar for bubble tea and the adjacent Oppa for sushi. 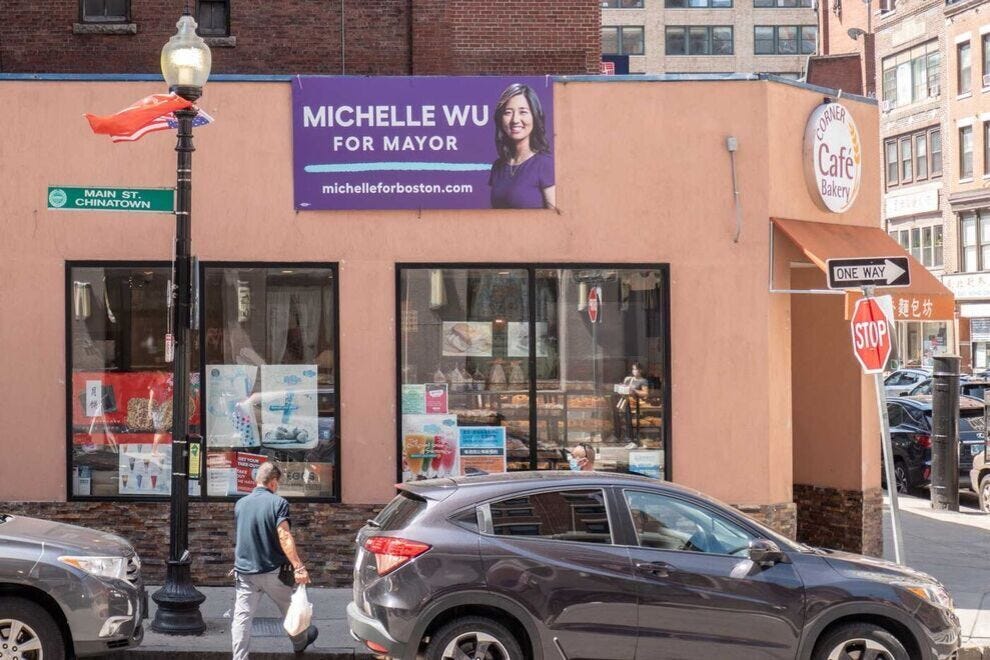 Boston’s Chinatown is the northernmost Chinese enclave in the eastern United States. The gate near the intersection of Beach and Hudson is an ideal place to start your food tour, with the majority of the food spots being located between Essex and Kneeland.

The dining options are a mix of modern and traditional. Hei La Moon is an upscale dim sum restaurant with around 200 items. Gourmet Dumpling House is a more casual spot where you can try traditional soup dumplings, as well as jellyfish, ox tongue or sautéed pig’s blood. Tea Do is a popular bubble tea spot. Pearl Street is lined with bakeries.

Both locals and tourists often make Chinatown their last stop before heading out of town via nearby South Station. Regardless of the time of day, you’ll likely see pedestrians strolling east with everything from egg custard tarts to French macarons from places like Great Taste, Eldo and Mrs. Choi’s.

With access to three different T lines, Chinatown is one of the most easily accessible Boston neighborhoods. If you’re looking for a mix of neighborhood flavors and local history, longtime Bostonian Jackie Church runs customizable walking tours for under $100. They typically include three to four different food tastings. It’s best to do the tour at the beginning of your trip so you can integrate some of her suggestions later on. 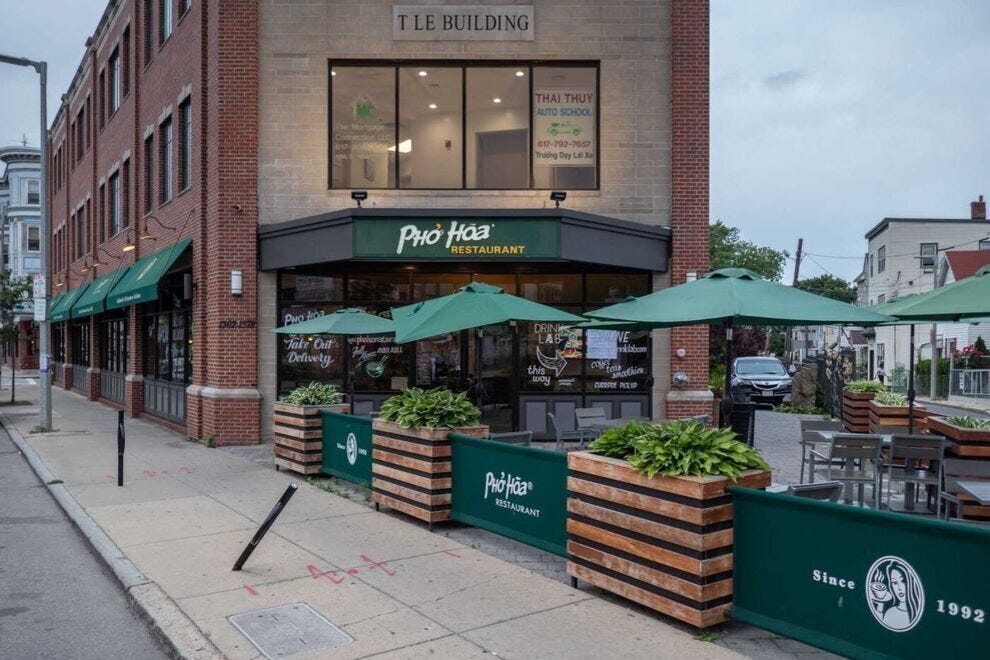 One of the many Vietnamese restaurants along Dorchester Ave. — Photo courtesy of Brian Cicioni

While you can find Vietnamese restaurants sandwiched in between noodle shops and dim sum houses throughout Chinatown and the surrounding neighborhoods, most locals will tell you to head to Dorchester if you’re in the mood for a steaming bowl of pho or a banh mi sandwich. All you have to do is take the T to Fields Corner, walk east to Dorchester Avenue and turn left. There are more than a dozen Vietnamese restaurants and stores in the mile-long stretch between Charles and Victoria streets.

Boston consistently ranks as one of the least car-friendly cities in the country, but you can find parking in Dorchester, which is much more spread out than most other places in this list. Chinatown tour guide Jackie Church recommends Pho Le, which is located at the corner of Dorchester and Kimball Street.

Their menu is as big as the dong to dollar exchange rate. While you’ll see pho on many of the tables, Le are also known for nuoc mam and Vietnamese clay pot catfish. If you’ve never tried beef-stuffed betel leaves, this is the place. Think of the stuffed grape leaves you get from Greek and Middle Eastern restaurants, but with nothing else inside but seasoned beef. Their durian smoothies are also an ideal way to sample the king of fruits without having to inhale the pungent scent of fresh durian.

Located right across the street, Pho Hoa is another option. They have outdoor dining, and like Pho Le, they have a private parking lot behind the restaurant. 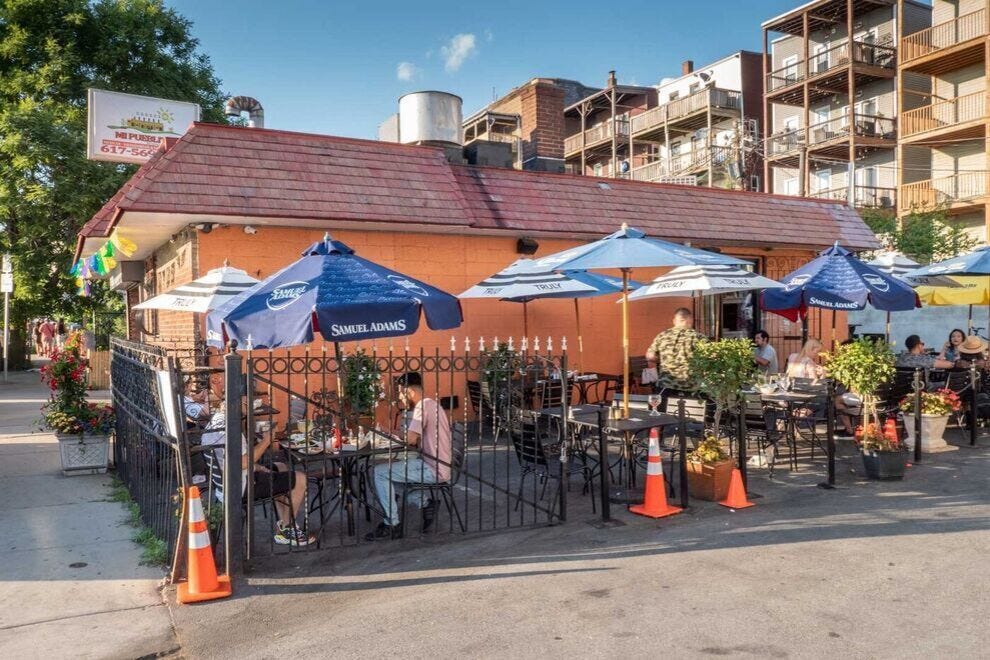 Also known as Eastie, this smurf head-shaped neighborhood between Logan Airport and Boston Harbor has some of the best Latin American food in Greater Boston. Pupusas outnumber pizzas along Meridian Street, which starts just north of the Maverick T station.

Most of the restaurants in this area are a mix of Mexican and Salvadoran, but there are other Central American options as well. The majority are small and informal, but Mi Pueblito is more on the festive side. In the summer, they turn their parking lot into an outdoor dining space. You can sit outside and enjoy a horchata along with an enchilada Salvadorena. Try the nuegados for dessert!

There are more Salvadoran restaurants west of the Wood Island T station along Bennington Street, which eventually runs into Meridian. Closer to the Airport T station, Helado Juli’s is a popular dessert spot. In the summer, the line can stretch as far back as Chelsea Street. The separate city of Chelsea (located just across the Chelsea Creek) has similar dining options along Broadway. 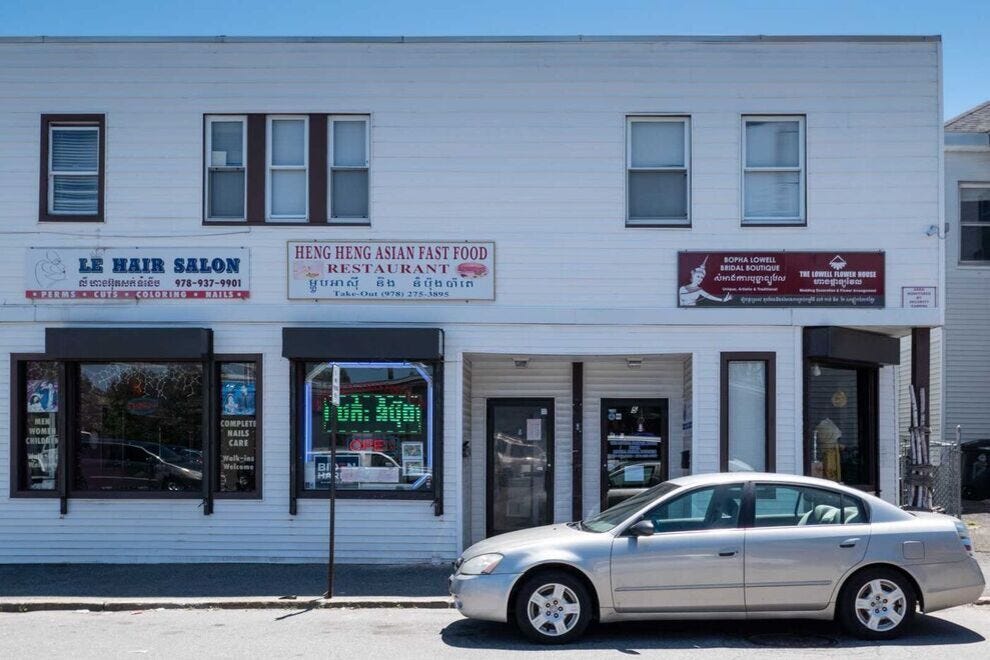 This former mill town at the convergence of the Concord and Merrimack Rivers is home to one of the highest concentration of Cambodians in the United States. In the Highlands neighborhood, you can find durian or jackfruit just as easily as you can find an apple or banana.

There are more Cambodian restaurants in this area west of the Lowell MBTA station than you’ll find in every other New England city combined. During the hot summer months, most of the restaurants will feel, sound and smell like Phnom Penh or Battambang, but the Highlands look more suburban, with large parking lots and open spaces.

If you include bakeries and takeout places, there are roughly a dozen different Cambodian eateries in Lowell, and most are in the Highlands. The majority are no-frills casual dining spots that were meant to give Khmer people a taste of home. But you can’t keep a good thing secret for long. Bostonians who realize that Cambodian food is not just…

Read More:If you love food, these 10 Greater Boston neighborhoods are for you