Can pickleball save the eatertainment sector?

Eatertainment firebrand Robert Thompson has a new angle for those who want to play, eat and drink in the post-pandemic era: Pickleball.

Thompson’s brand-creating company Angevin & Co. next year plans to launch the new Camp Pickle, a 50,000- to 75,000-square-foot complex that includes a restaurant and bar alongside indoor and outdoor pickleball courts. There will be other games as well.

It’s one of a rapidly growing number of pickleball-and-dining facilities cropping up across the country, hoping to capitalize on what has been described as America’s fastest-growing sport. Others include Chicken N Pickle, Smash Park and Electric Pickle.

Thompson, of course, is known as the founder of Punch Bowl Social, a break-the-mold eatertainment chain that showed tremendous promise before the pandemic came along and threatened to end such social gathering spots.

Cracker Barrel Old Country Store Inc. had invested in Punch Bowl — then divested after the pandemic hit, forcing the chain into bankruptcy. Thompson stepped down as CEO in 2020 and moved on to build new brands, including a boutique hotel in New Orleans called The Frenchmen and a beverage concept in Denver called Three Saints Revival.

But Thompson has been drawn back into the eatertainment world by pickleball, a sport that offers unique opportunities, he said.

Reportedly invented in 1965 and named for the creator’s dog, Pickleball has caught fire over the past decade. It first became popular among an older demographic, in part because it’s easier on joints and can be played at all fitness levels, and also because it is a very social game, often played in groups of four or more.

But younger players also have increasingly embraced pickleball. Thompson said the fastest growing demographics are 8-to-18, and 19-28-year olds. And the sport has appeal for both family and corporate gatherings.

Currently there are an estimated 5 million people playing pickleball in the U.S., a number Thompson said is projected to grow to 40 million over the next decade. That growth has created demand for more courts.

Unlike most gaming spots, people are willing to play pickleball from morning to midnight, allowing for all-day revenue, Thompson said.

“In the past, eatertainment hasn’t had the opportunity to activate at 8 a.m.,” he noted.

Thompson expects to generate more than 80% of sales from food and beverage. There will be a large from-scratch kitchen with counter service, but players can also order food and drink courtside. Tents/cabanas and warming fire pits will help shield players from the elements.

The first Camp Pickle is scheduled to open in Huntsville, Ala., in 2024. A second larger site—75,000 square feet—is planned for Centennial, Colo., near Denver.

Thompson said the company plans to open 10 corporate locations before early 2026, and the concept will also be franchised, a move aimed at real estate developers who understand the opportunities of pickleball but may not know how to run eatertainment concepts. 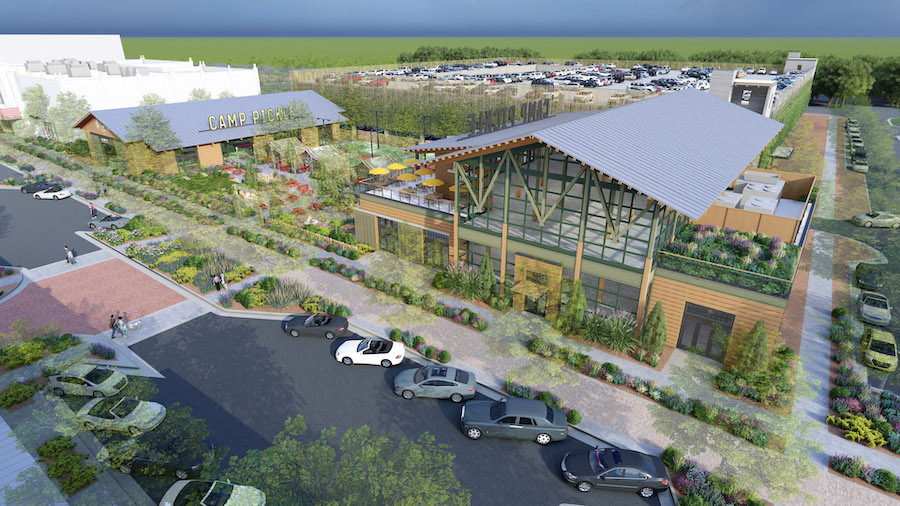 Pickleball has broad appeal across demographics and also has event potential with tournaments.

And Angevin & Co. has other new concepts coming.

There’s Jaguar Bolera, a more-premium eatertainment concept scheduled to debut in Raleigh, N.C. next year, for example. That concept will have duckpins, karaoke and what Thompson calls “maker-tainment,” classes where diners can do or make something.

Thompson said the company has also acquired the former site of Paul Prudhomme’s restaurant K-Paul in New Orleans, which closed in 2020. There, the company is developing the French Quarter Boulangerie, to open next year, which Thompson describes as a growth concept designed to be a different model in the breakfast space, with counter service, fresh baked breads and a wine program.

McDonald’s pushes back against the California fast-food wage bill