Danny Meyer is stepping down as CEO of Union Square Hospitality Group, the innovative restaurant company he founded nearly four decades ago.

He’ll be succeeded by Chip Wade, who has been USHG’s president and COO since 2019, effective Sept. 6. Meyer will remain with the company as executive chairman, and will continue his roles as managing partner of USHG’s investment arm Enlightened Hospitality Investments and as chairman of Shake Shack.

The outgoing leader said Monday that Wade has been USHG’s CEO-in-waiting since he was hired, and that now was “the ideal time for me to hand Chip the baton.”

“When Chip joined us three years ago, our hope was that he’d one day be prepared to succeed me as USHG’s leader, and that day has unquestionably arrived,” Meyer said in a statement. “He is an exemplary operational leader, wholly dedicated to our team members and committed to their professional and personal growth. We’ve partnered together and navigated the business through an incredibly challenging period emerging healthier than ever.” 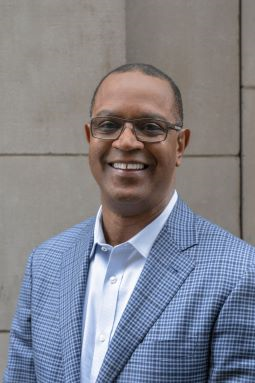 Chip Wade will take over as USHG CEO in September.

Meyer, who is 64, laid the groundwork for USHG in 1985 with the opening of Union Square Cafe in New York City. That led to a series of other establishments, such as Gramercy Tavern, The Modern and Daily Provisions, that have become indelible parts of the city’s dining landscape. He also created Shake Shack—a no-frills burger stand opened in Madison Square Park in 2001 that became an NYC phenomenon and later an international brand.

“Starting this company 37 years ago—with aspirations to open just one successful restaurant—and seeing the outstanding and inspirational role our colleagues have come to play in our industry, has been the personal and professional joy of a lifetime,” Meyer said in a statement.

By 2019, Meyer had begun planting the seeds for his and USHG’s next chapter. After he hired Wade, the two began working on a “long-term growth plan” for the company, which included building out its leadership team with its first CMO and a new chief people officer.

The pair then steered USHG through the pandemic, which included restaurant closures and a 90% reduction in staff, and into recovery: It is now “surpassing pre-pandemic performance levels,” according to a press release announcing the transition.

Wade came to USHG from Red Lobster, where he was EVP of operations, and its former parent Darden Restaurants, where he had been SVP of operations. Before that, he was COO of Boston-based Legal Sea Foods. His restaurant career spans more than 30 years.

“I am honored and humbled by today’s announcement,” Wade said in a statement. “Working with Danny over the past three years has been a career highlight, and I am so proud of what we have accomplished together. Day in and day out, I have the unique privilege of witnessing the power of hospitality and the success of an employee-first model, evident across all USHG businesses. As CEO, I’m looking forward to accelerating our growth through cultural, operational and financial performance, in addition to driving new business priorities.”

At USHG, Wade has been particularly involved with the company’s events arm, which recently expanded and relocated to Brooklyn’s Industry City. He has also helped grow its leadership and development consultancy, the Hospitality Quotient.